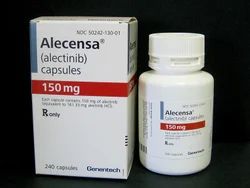 
Two drugs that target genetic flaws are giving people with specific types of advanced lung cancer a chance to live longer and better, a pair of new clinical trials finds.

ALK is a gene that produces a protein that helps cancer cells grow and spread, according to the American Cancer Society (ACS).

EGFR is a substance normally found on cells that helps them grow and divide, the ACS says.

Alectinib works more than a year longer than crizotinib (Xalkori), which itself supplanted chemotherapy a few years back because it proved more effective with fewer side effects, Johnson said.

"This is kind of a game changer, because the drug itself works at least for two years, plus there are other treatments" that can be substituted when it ultimately becomes ineffective, Johnson said of alectinib. "We used to have to tell these patients 10 or 15 years ago that you've got eight months to a year. Now they most likely have years."

Both of these genetically driven forms of lung cancer are more common in nonsmokers, the ACS says.

The studies were both funded by the drug manufacturers. Hoffmann-La Roche funded the alectinib study. Pfizer and SFJ Pharmaceuticals Group funded the dacomitinib study.

The first clinical trial revealed that alectinib halts lung cancer growth for about 26 months on average. That compared to about 10 months on average for crizotinib, the drug now used as front-line treatment for ALK-positive patients.

Alectinib also works 84 percent better than crizotinib at preventing spread of advanced lung cancer to the brain, because it is better able to penetrate into the brain and kill cancer cells there, said lead researcher Dr. Alice Shaw, director of thoracic oncology at Massachusetts General Hospital Cancer Center in Boston.

Alectinib already is approved in the United States as a treatment for ALK-positive patients who no longer respond to crizotinib, Shaw said.

The results should "establish alectinib as the new standard of care" for ALK-positive lung cancer patients, rather than crizotinib, Shaw said.

Not only did the drug work better and longer, but it also produced fewer side effects in patients, noted Heymach, chair of thoracic/head and neck oncology for the University of Texas MD Anderson Cancer Center in Houston.

The most common side effects for alectinib were fatigue, constipation, muscle aches and swelling, while crizotinib patients most often suffered from gastrointestinal problems and liver enzyme abnormalities, according to the researchers.

Each year about 15,000 people in the United States are diagnosed with EGFR-positive lung cancer, which involve mutations that increase the growth of cancer cells, researchers said in background notes.

"From the perspective of doctors who treat lung cancer daily, this is really a substantial advance," Heymach said, noting that the results put the drug "at the front of the pack in terms of efficacy."

Heymach said the side effects are "not life-threatening toxicities."

"These are toxicities that doctors who treat this for a living become accustomed to managing," Heymach said.

"At the end of the day, I think we now have one additional choice" in treating EGRF-positive non-small cell lung cancer, Mok concluded, adding that dacomitinib should be considered as a new first-line alternative treatment. The drug has not received FDA approval.

Neither of the tested drugs will be cheap. "Almost all these targeted drugs are thousands of dollars per month," Johnson said.

The results of both trials were scheduled to be presented Monday at ASCO's annual meeting, in Chicago. The findings were also being published June 6 in the New England Journal of Medicine.