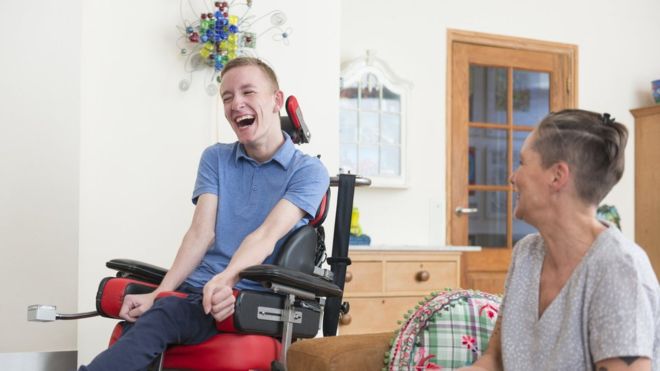 Gut bacteria may be playing a role in motor neurone disease, according to early studies in animals and people.


Gut bacteria may be playing a role in motor neurone disease, according to early studies in animals and people.

Experiments show some species of bacteria - and the chemicals they make - change the pace of the disease.

The team at the Weizmann Institute in Israel says it adds to work suggesting the "microbiome" alters the brain in autism and Parkinson's disease.

The research is at a very early stage, but the team hope it could lead to the first treatments for the disease.

What is motor neurone disease?

It is a group of diseases that stop messages from the brain and spinal cord from reaching the muscles.

It leads to muscles wasting away and affects the ability to move, eat and even breathe.

The most common form of the disease is amyotrophic lateral sclerosis (ALS), and life expectancy is usually between two and five years after symptoms start.

Although physicist Stephen Hawking lived for more than half a century with a rare form of motor neurone disease.

What is the microbiome?

Is the microbiome involved?

The experiments, detailed in the journal Nature, used mice genetically programmed to get ALS.

The animals' symptoms became much more severe after having a dose of antibiotics to kill their gut microbiome.

"We were very surprised," said researcher Prof Eran Elinav, who could see the difference in the mice's muscle and brain tissue.

The team honed in on the gut microbes and found 12 species that seemed to exist in much higher or lower numbers in the diseased mice.

By adding these bacteria, one species at a time, into mice with ALS the researchers showed some made the disease more severe.

One species Akkermansia muciniphila slowed the pace of the disease.

"But in no way are we implying we have stopped, cured or reversed the disease," Prof Elinav told BBC News.

But how can gut bacteria affect the brain?

"The bacteria are in the gut, but disease is very far from the gut," said Prof Elinav.

He added: "Our working hypothesis is this is done by secretion of small molecules that can penetrate into the bloodstream and then different organs."

Researchers identified a chemical, called nicotinamide, that was being produced by Akkermansia muciniphila, which when injected into diseased mice also improved their condition.

It is thought the chemical is involved in minimising oxidative stress and preserving healthy neurone function for longer.

"It presents a very exciting prospect of understanding how our unique signature of microbes, and their function, affect processes not necessarily where the microbes live," Prof Elinav said.

Does this happen in people too?

There is some early stage work in people.

Thirty-seven patients living with the disease had their blood, microbiome and in some cases spinal fluid compared with healthy people with whom they were living.

Again, differences were found in gut microbes and levels of nicotinamide in the body.

However, this is the limit of the human research and further trials are planned.

"We cannot even think these findings are a new cure or treatment that people can do at home."

Will this help patients?

The hope is further research will identify a drug that that can change the pace of the disease and buy people more time.

The Weizmann team is not anticipating a way of preventing or curing motor neurone disease.

Prof Elinav said: "This is a cureless, devastating disease.

"Doing something to slow down ALS is a very important step in a disease we have almost nothing we can do about."

What do the experts think?

"This adds to an emerging, but still fuzzy, picture of a different metabolism that seems to occur in people with ALS," Dr Brian Dickie, the Motor Neurone Disease Association's director of research development said.

He added: "Diet and exercise are also being studied as potential factors associated with the disease."