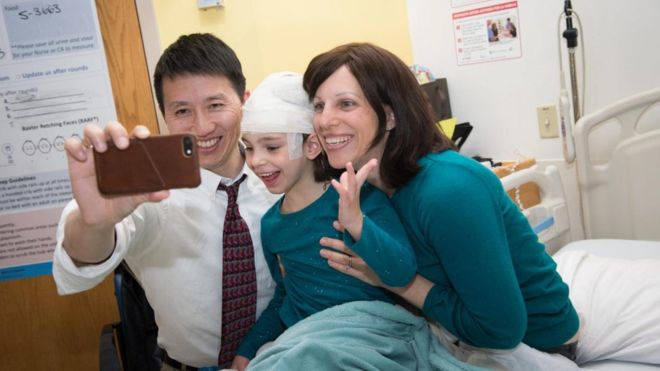 A girl with a deadly brain disease has been given a unique drug that was invented from scratch just for her and in a fraction of the normal time.


A girl with a deadly brain disease has been given a unique drug that was invented from scratch just for her and in a fraction of the normal time.

In less than a year, doctors at Boston Children's Hospital in the US created the tailor-made drug to correct specific errors in Mila's DNA.

She is now having far fewer seizures, although she is not cured.

Batten disease is incredibly rare, gets progressively worse and is always fatal.

Mila was three when her right foot began to turn inwards. A year later she needed to hold books close to her face as her vision was fading and by the age of five she would occasionally fall and her walk became unusual.

At six, Mila was blind, could barely speak and was having seizures.

The disease can be caused by a range of genetic mutations that stop cells being able to break down and recycle waste.

Instead, junk builds up and it can lead to the death of brain cells.

The route to therapy

Mila's family had been given a diagnosis of Batten disease and they knew it was genetic.

They began a campaign - Mila's Miracle Foundation - in the hope of curing the incurable.

"I was sitting down to dinner one night and my wife told me a friend of hers had shared a Facebook post from a family in Colorado seeking help," Dr Timothy Yu told the BBC.

He first met Mila in January 2017 and what followed was incredibly rapid and unprecedented.

The team in Boston performed whole-genome sequencing - a detailed interrogation - on Mila's DNA, her genetic code, and uncovered a unique mutation that was causing her disease.

Having seen the fault, the researchers thought it might be possible to treat it.

They designed a drug, tested it on Mila's cells and on animals in the laboratory and won approval to use it from the US Food and Drug Administration.

Drugs normal take around a decade-and-a-half to get from the laboratory, go through clinical trials and get to patients.

The US team got there in a year.

"When we stopped and looked back we were really proud and surprised. Sometimes it's helpful to be naive, and knowing we had a child who was declining as we were doing the work motivated everyone to move incredibly fast," Dr Yu said.

He added: "We're not aware of another case where another drug has been tailored in this way."

What does it mean for Mila?

The drug cannot undo all the damage that has been done.

"I would say for the first year we were really thrilled. It seemed there was very little progression of the disease," Dr Yu told the BBC.

This is a disease where the decline is normally inexorable.

The frequency of Mila's seizures plummeted from 15-30 a day (typically lasting around two minutes) to between zero and 20 a day, mostly lasting just a few seconds.

Her family reported she was standing straighter and swallowing better.

There are signs in her second year of treatment that the disease is advancing again and Mila continues to be closely monitored.

"We think it's progressing more slowly than it would otherwise and we hold out hope it may stabilise further," Dr Yu said.

He believes that if in future cases it is possible to intervene even earlier - when a child is three or four - that "could really make a big difference".

How does the drug work?

The approach used is incredibly clever and required a precise understanding of exactly what was going wrong.

One genetic instruction for building a protein was defective in Mila's DNA and the resulting ineffective protein was causing her Batten disease.

To get from DNA to a protein there is a stage in the middle - a messenger (mRNA) is created that takes the instructions from the DNA in a cell's nucleus to the site where proteins are made.

But there was a problem with building the messenger.

Not all of the genetic code in a section of DNA is copied over into the mRNA - parts are cut out in a process known as splicing.

But in Mila's case the splicing was going wrong, so the wrong messenger was being made and a faulty protein was the result.

The team developed a drug that sticks to the forming mRNA and stops it being cut in the wrong the place.

It is the same technology - antisense oligonucleotide therapy - that is offering the first hope of treating the devastating disease Hungtinton's.

The details have been published in the New England Journal of Medicine.

How much did all this cost?

How much this highly personalised therapy costs is going to be one of the major barriers to more people benefiting.

The research team will not say how much they spent developing the drug.

But Dr Yu said: "We wouldn't have taken it forward if we didn't see a path to making this accessible.

"The idea of millions of dollars for drugs for millionaires does not sit well with what we're doing."

Could this be a new approach to medicine?

There are more than 7,000 rare diseases caused by genetic abnormalities, which often lack any form of treatment.

Not all rare diseases - or even all patients with Batten disease - could be treated in the same way as Mila.

But the hope is that truly personalised medicine, based on a detailed genetic understanding of what is causing a disease could lead to this kind of precision treatments.

Dr Janet Woodcock, from the drug regulatory body the US Food and Drug Administration, said individualised medicines, known as N-of-one because they are used by just one person, throw up new issues.

She said: "In these 'N-of-one' situations, what type of evidence is needed before exposing a human to a new drug?

"Even in rapidly progressing, fatal illnesses, precipitating severe complications or death is not acceptable, so what is the minimum assurance of safety that is needed?"