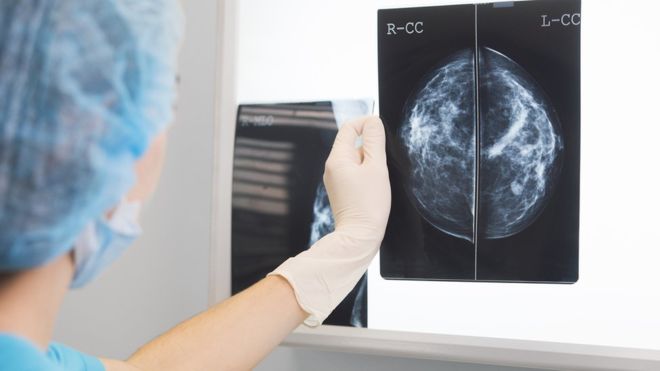 Artificial intelligence is more accurate than doctors in diagnosing breast cancer from mammograms, a study in the journal Nature suggests.


Artificial intelligence is more accurate than doctors in diagnosing breast cancer from mammograms, a study in the journal Nature suggests.

An international team, including researchers from Google Health and Imperial College London, designed and trained a computer model on X-ray images from nearly 29,000 women.

AI was still as good as two doctors working together.

Unlike humans, AI is tireless. Experts say it could improve detection.

How good is it?

The current system in the NHS uses two radiologists to analyse each woman's X-rays. In rare cases where they disagree, a third doctor assesses the images.

In the research study, an AI model was given anonymised images, so that the women could not be identified.

Unlike the human experts, who had access to the patient's history, AI had only the mammograms to go on.

The results showed that the AI model was as good as the current double-reading system of two doctors.

And it was actually superior at spotting cancer than a single doctor.

Compared to one radiologist, there was a reduction of 1.2% in false positives, when a mammogram is incorrectly diagnosed as abnormal.

There was also a reduction of 2.7% in false negatives, where a cancer is missed.

Dominic King from Google Health said: "Our team is really proud of these research findings, which suggest that we are on our way to developing a tool that can help clinicians spot breast cancer with greater accuracy."

It takes over a decade of training as a doctor and specialist to become a radiologist, capable of interpreting mammograms.

Reading X-rays is vital but time-consuming work, and there is an estimated shortage of more than 1,000 radiologists across the UK.

Will AI take over from humans?

No. It took humans to design and train the artificial intelligence model.

This was a research study, and as yet the AI system has not been let loose in the clinic.

Even when it is, at least one radiologist would remain in charge of diagnosis.

But AI could largely do away with the need for dual reading of mammograms by two doctors, easing pressure on their workload, say researchers.

Prof Ara Darzi, report co-author and director of The Cancer Research UK (CRUK) Imperial Centre, told the BBC: "This went far beyond my expectations. It will have a significant impact on improving the quality of reporting, and also free up radiologists to do even more important things."

Women aged between 50 and 70 are invited for NHS breast screening every three years - those who are older can ask to be screened.

The use of AI could eventually speed up diagnosis, as images can be analysed within seconds by the computer algorithm.

Sara Hiom, director of cancer intelligence and early diagnosis at CRUK, told the BBC: "This is promising early research which suggests that in future it may be possible to make screening more accurate and efficient, which means less waiting and worrying for patients, and better outcomes."

Helen Edwards, from Surrey, was diagnosed with breast cancer at the age of 44, before she was eligible for screening.

She required surgery, chemotherapy and radiotherapy, but has been cancer-free for more than a decade.

She was a patient representative on the CRUK panel which had to decide whether to grant Google Health permission to use the anonymised breast cancer data.

Helen told the BBC: "Initially I was a bit concerned about what Google might do with the data, but it is stripped of all identifiers.

"In the long term this can only benefit women.

"Artificial intelligence machines don't get tired...they can work 24/7 whereas a human being can't do that, so to combine the two is a great idea."