Social distancing and coronavirus: The science behind the two-metre rule 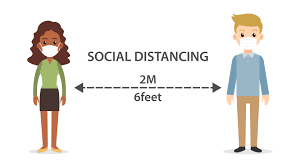 Ministers are reported to be considering whether to relax the two-metre rule for social distancing in workplaces.


Ministers are reported to be considering whether to relax the two-metre rule for social distancing in workplaces.

It could make it easier for people to get back to jobs where it is not always feasible to stay apart.

But a key question is whether that would be safe, given how little is known about how far the virus can spread.

A new report by the government's scientific advisers is due to be released shortly assessing latest research into the risks.

What does science say about the rule?

There is a wide variety of recommendations in different countries, but a simple guide is that the closer you are to someone who is infected, the greater the risk.

The World Health Organization says that a distance of one metre is safe, while others suggest 1.5m or 1.8m with the UK opting for two metres.

Also the longer you spend in close proximity with an infected person, the more your chances of catching the virus go up.

That's why the UK government says that where face-to-face contact is essential, "this should be kept to 15 minutes or less wherever possible".

And one leading scientist says that timing can really make a difference.

"Spending two seconds one metre apart is as dangerous as spending one minute two metres apart," he says.

Where does the two-metre rule come from?

Surprisingly, it can be traced back to research in the 1930s.

Back then scientists established that droplets of liquid released by coughs or sneezes will either evaporate quickly in the air or be dragged by gravity down to the ground.

And the majority of those droplets, they reckoned, would land within one to two metres.

That is why it is said the greatest risks come from having the virus coughed at you from close range or from touching a surface - and then your face - that someone coughed onto.

How conclusive is that? Many scientists regard close proximity and surface contacts as the main routes of transmission.

But some researchers are now concerned that the coronavirus is not just carried in droplets.

They worry that it can also be transported through the air in tiny particles called aerosols.

If that is the case, then the flow of wind from someone's breath could carry the virus over longer distances.

She is critical of the current safety guidance: "Having this false idea of safety at one to two metres - that somehow drops will just fall to the ground at that distance - is not based on what we have quantified, measured and visualised directly."

And a study carried out at hospitals in China, which found traces of coronavirus in Covid-19 wards and intensive care units, estimated that four metres is a better safe distance.

But for the US Centres for Disease Control, the role of aerosols in spreading the virus is "currently uncertain".

And what's still not established is whether any virus that spreads further than two metres can still be infectious.

Is it safer to be outdoors than indoors?

There is wide agreement that the answer to that is yes.

That is why construction is typically among the first type of work to be allowed when lockdowns are eased.

To try to find out more, Japanese researchers investigated 110 cases of Covid-19, following up the contacts of the people infected.

They estimated that the odds of the infection being passed on were nearly 19 times greater indoors than when outside in the fresh air.

Their study concluded: "It is plausible that closed environments contribute to secondary transmission of Covid-19 and promote superspreading events."

Why don't we have definite answers?

It is only a few months since the coronavirus emerged and in that short time scientists have learned a great deal about it.

But there is a long way to go and confirming exactly the right distance is one of the unanswered questions.

It will take careful studies of how the virus can be carried, and how viable it remains, which will all take time.

Amid the uncertainty, many governments are urging - or ordering - their citizens to cover their faces.

In Spain, anyone using public transport from Monday will have to wear a mask, and the same applies in Germany.

The logic is that where keeping apart is not realistic - up to whatever distance is recommended - then even a homemade covering can limit how much virus is released from an infected person's mouth or nose.

The Scottish government is among those to recommend that in confined spaces, a non-medical mask should be worn.

The UK government is still considering what to advise the British public as a whole.

Health professionals have long worried that medical and care staff might lose out if supplies are snapped up and that masks would give people a false sense of security leading them to give up other measures like social distancing.

Prime Minister Boris Johnson has suggested that masks might help slow the spread of the disease and may give people confidence to resume their jobs, presumably in workplaces where two-metre separation is not an option.