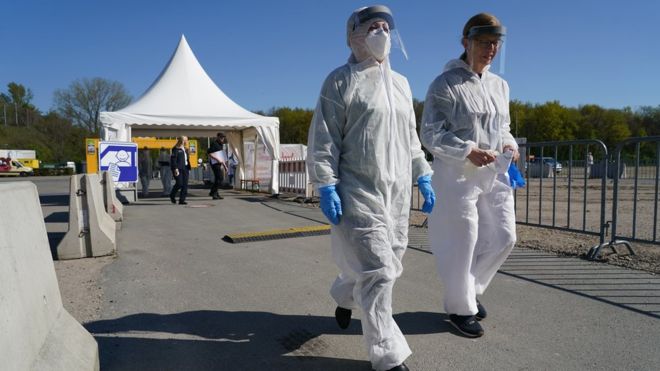 According to the Robert Koch Institute (RKI), the reproduction rate - the estimated number of people a confirmed patient infects - is now above 1.

This means the number of infections is now rising in the country.

The report came as thousands of Germans gathered on Saturday calling for a total end to the lockdown.

Chancellor Angela Merkel announced a broad relaxation of national restrictions on Wednesday after talks with the leaders of Germany's 16 states.

All shops are allowed to reopen, pupils will gradually return to class and the Bundesliga - Germany's top football league - will restart as soon as next weekend.

But there were protests across the country on Saturday, as some called for measures to be lifted even faster.

Germany has the seventh-highest number of confirmed cases in the world, with latest RKI data on Sunday showing the reported infected tally at 169,218 and a reported death toll of 7,395.

What did the report say?

The reproduction number is a way of rating a disease's ability to spread. It is not a fixed number because it changes as our behaviour changes or as immunity develops.

It is one of three important measurements for monitoring the outbreak, the others being the severity of symptoms and the number of cases.

The report from the public health agency released on Saturday said the reproduction rate was estimated at 1.1, while Sunday's update put it at 1.13. The number has been below 1 for most of the last three weeks.

The agency said this estimate involved "a degree of uncertainty", and the rate would have to be observed closely over the coming days.

It was not yet possible to assess "whether the decreasing trend in the number of incident cases observed over the past few weeks will continue or whether case numbers will again increase", it added.

Germany has won praise for its response to the outbreak. Mass testing and effective lockdown restrictions have helped keep the death toll far lower than in other European countries.

But some have criticised Mrs Merkel's decision to relax those measures after speaking with the heads of the 16 states on Wednesday.

The chancellor imposed an "emergency brake", requiring local authorities to reimpose restrictions if cases rise above a threshold of 50 per 100,000 people.

Outbreaks at meat processing plants in the states of North Rhine-Westphalia and Schleswig-Holstein have already reportedly breached that line, and forced district officials to act.

And one district in the state of Thuringia reportedly recorded more than 80 infections per 100,000 people, thought to be due to outbreaks at care facilities.

The start of a trend?

These latest official figures appear to show that the number of Covid-19 infections in Germany may be rising faster again.

The reproduction rate has risen to 1.1 - that means that ten people will pass the virus on to 11 more people. To keep the pandemic in check this level should be below one.

This figure though is an estimate. And it does vary a lot from day to day. So officials warn against interpreting too much into short-term changes.

But this all comes as Germany is easing restrictions in some of the most risky areas for potential infections - such as restaurants, hotels and professional football.

So the government will be watching closely to see if this does mark a trend. And if the virus is spreading more rapidly, some restrictions could be reimposed.

At the same time though the daily death toll in Germany is the lowest it's been in more than a month. Fewer than 40 people here died of Covid-19 in the 24 hours until Sunday. In other large European countries this level has at times risen to almost 1,000.

How is Germany taking the lockdown?

While some worry that the country is easing its restrictions too soon, others in Germany are protesting against the continued lockdown.

Small numbers of people have taken to the streets in recent weeks but on Saturday this swelled to thousands of people who gathered in cities across the country - including Berlin, Frankfurt, Munich and Stuttgart.

Officers in Berlin arrested about 30 people outside the Reichstag on Saturday for not obeying social distancing measures. Authorities say some demonstrators threw bottles at the police.

Right-wing groups and conspiracy theorists also took part in some of the protests.