Climate change: Summers could become 'too hot for humans' 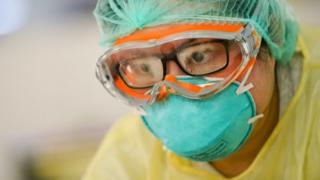 Millions of people around the world could be exposed to dangerous levels of heat stress - a dangerous condition which can cause organs to shut down.


Millions of people around the world could be exposed to dangerous levels of heat stress - a dangerous condition which can cause organs to shut down.

Many live in developing countries, and do jobs that expose them to potentially life threatening conditions.

These include being out in the open on farms and building sites or indoors in factories and hospitals.

Global warming will increase the chances of summer conditions that may be "too hot for humans" to work in.

When we caught up with Dr Jimmy Lee, his goggles were steamed up and there was sweat trickling off his neck.

An emergency medic, he's labouring in the stifling heat of tropical Singapore to care for patients with Covid-19.

There's no air conditioning - a deliberate choice, to prevent the virus being blown around - and he notices that he and his colleagues become "more irritable, more short with each other".

And his personal protective equipment, essential for avoiding infection, makes things worse by creating a sweltering 'micro-climate' under the multiple layers of plastic.

"It really hits you when you first go in there," Dr Lee says, "and it's really uncomfortable over a whole shift of eight hours - it affects morale."

One danger, he realises, is that overheating can slow down their ability to do something that's vital for medical staff - make quick decisions.

Another is that they may ignore the warning signs of what's called heat stress - such as faintness and nausea - and keep on working till they collapse.

What is heat stress?

It's when the body is unable to cool down properly so its core temperature keeps rising to dangerous levels and key organs can shut down.

It happens when the main technique for getting rid of excess heat - the evaporation of sweat on the skin - can't take place because the air is too humid.

And as Dr Lee and other medics have found, the impermeable layers of personal protection equipment (PPE) - designed to keep the virus out - have the effect of preventing the sweat from evaporating.

According to Dr Rebecca Lucas, who researches physiology at the University of Birmingham, the symptoms can escalate from fainting and disorientation to cramps and failure of the guts and kidneys.

"It can become very serious as you overheat, and in all areas of the body."

How can we spot it?

A system known as the Wet Bulb Globe Temperature (WBGT) measures not only heat but also humidity and other factors to give a more realistic description of the conditions.

Back in the 1950s, the US military used it to work out guidelines for keeping soldiers safe.

When the WBGT reaches 29C, for example, the recommendation is to suspend exercise for anyone not acclimatised.

Yet that's the level Dr Lee and his colleagues are regularly experiencing at Singapore's Ng Teng Fong General Hospital.

And at the top of the scale - when the WBGT registers 32C - the US says strenuous training should stop because the risk becomes "extreme".

But levels that high have recently been recorded inside hospitals in Chennai in India by Prof Vidhya Venugopal of the Sri Ramachandra University.

She's also found workers in a salt pan enduring a WBGT that climbs during the day to 33C - at which point they have to seek shelter.

And in a steel plant, a ferocious level of 41.7C was recorded, the workers being among the most vulnerable to what she calls "the huge heat".

What impact will climate change have?

As global temperatures rise, more intense humidity is likely as well which means more people will be exposed to more days with that hazardous combination of heat and moisture.

Prof Richard Betts of the UK Met Office has run computer models which suggest that the number of days with a WBGT above 32C are set to increase, depending on whether greenhouse gas emissions are cut.

And he spells out the risks for millions of people already having to work in the challenging combination of extreme heat and high humidity.

"We humans evolved to live in a particular range of temperatures, so it's clear that if we continue to cause temperatures to rise worldwide, sooner or later the hottest parts of the world could start to see conditions that are simply too hot for us."

Another study, published earlier this year, warned that heat stress could affect as many as 1.2bn people around the world by 2100, four times more than now.

What solutions are there?

According to Dr Jimmy Lee, "it's not rocket science".

People need to drink plenty of fluid before they start work, take regular breaks and then drink again when they rest.

His hospital has started laying on "slushie" semi-frozen drinks to help the staff cool down.

But he admits that avoiding heat stress is easier said than done.

For him and his colleagues, going for rests involves the laborious process of changing out of PPE and then back into a new set of equipment.

There's a practical problem as well - "some people do not want to drink so they can avoid having to go to the toilet," he says.

And there's a professional desire to keep working whatever the difficulties so as not to let colleagues and patients down at a time of crisis.

People who are highly motivated can actually be at the greatest risk of heat injury, says Dr Jason Lee, an associate professor in physiology at the National University of Singapore.

He's a leading member of a group specialising in the dangers of excessive heat, the Global Heat Health Information Network, which has drawn up guidelines to help medics cope with Covid-19.

Dr Lee says that as well as measures like rest and fluids - and shade for outdoor workers - a key strategy for resisting heat stress is to be fit.

"By keeping yourself aerobically fit, you're also increasing your heat tolerance, and there are so many other benefits too."

And he sees the challenge for medics, sweating inside their PPE as they deal with Covid-19, as "almost like a full dress rehearsal" for future rises in temperature.

"This climate change will be a bigger monster and we really need a coordinated effort across nations to prepare for what is to come.