Coronavirus: Why isn't the UK testing travellers on arrival? 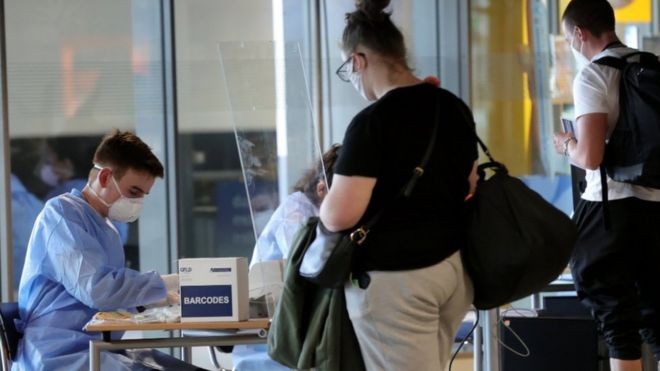 A holiday in Spain now means two weeks of quarantine on return to the UK to help stop the spread of coronavirus across borders.


A holiday in Spain now means two weeks of quarantine on return to the UK to help stop the spread of coronavirus across borders.

Some countries, such as Iceland, offer travellers a choice on arrival if they have stayed in areas with high virus levels.

Anyone entering must either self-quarantine for 14 days or get tested for Covid-19.

And Germany is planning compulsory tests at its airports for anyone arriving from a high-risk country.

Why isn't the UK doing this?

The UK government has been looking at the merits and risks of test-on-arrival checks for travellers.

At the moment, it says it has no plans to introduce testing at airports, saying it is not just logistically difficult but risks missing some cases of coronavirus.

It says asking travellers to self-isolate for 14 days instead reduces the risk to public health, but is keeping all quarantine measures under review.

What is the problem with testing?

No test is perfect.

Nose or throat swab tests are available that can detect if someone is currently infected with coronavirus.

They are safe and accurate, but can sometimes give a false negative result.

That means some people who have the test may be incorrectly given the all clear when they actually have the virus and could spread it to others.

Why do false test results occur?

People who have just caught coronavirus might not yet have sufficient amounts of the virus in their body for the test to detect.

It can take days for the virus to reach detectable levels, meaning someone who tests negative could still be incubating an infection.

Dr Joshua Moon from the University of Sussex Business School said: "This is concerning as a negative test result may give people a false sense of security."

Doing a swab test correctly can also be a bit tricky - you have to push the long, skinny swab stick deep into the nose or throat.

If it doesn't go in far enough then the sample may not be good enough to do the test or get a reliable result.

Couldn't it still be useful and more convenient than quarantine?

The government says it is important to take a cautious approach. Nobody wants to see rates of coronavirus rising again.

If every traveller returning from high-infection countries properly adheres to the fortnight of quarantine - by staying at home and not going to the shops or having visitors - then the risk of spreading coronavirus is extremely low.

It comes down to balancing risks and understanding what is feasible.

Prof Rowland Kao, professor of veterinary epidemiology and data science at the University of Edinburgh, says "test on arrival" would not have to be perfect, but would have to reduce the risk of spread sufficiently.

"As it stands, we have to be prepared to introduce quarantine or close borders to many countries, and also be prepared for restrictions to be put in place should UK cases start rising again as could very well happen. As an alternative, government could fund a scientifically designed pilot, where individuals are tested at the airport in sufficient numbers and monitored thereafter to determine whether such an approach would work."

How would it work?

Private testing companies have suggested doing a pilot study in the UK.

The scheme would allow travellers to book a test conducted at the airport on arrival by a trained nurse and processed in seven to 24 hours.

In theory, and if the government agreed, travellers with a negative test result could then be released from quarantine and would only need to self-isolate if, like anyone else, they developed symptoms.

A spokesperson for Swissport and Collinson (which are proposing a testing pilot in the UK) said: "This testing on arrival concept provides a safe way to open key trade routes for the UK, and can act as a critical backstop for when countries currently marked as green [lower risk] experience spikes in cases that result in them needing to be reclassified as requiring a quarantine period, as we have seen with Spain."

Prof Paul Hunter, an expert in health protection at the University of East Anglia, has reservations: "Given that the incubation period of Covid-19 is, on average five to six days and maybe the test may become positive about one day before onset of symptoms, and also given that the test is far from 100% sensitive even in clinically ill patients, airport screening as suggested will miss a substantial proportion of infected people."

Prof Steven Evans, from the London School of Hygiene and Tropical Medicine (LSHTM), says people testing negative might need a second test a few days later to be sure they were still negative, because some people can have and spread the virus without experiencing any symptoms themselves.

Dr Sam Clifford, also from the LSHTM, has done some research on the topic. He says doing a week of quarantine with a swab test on day seven might be a compromise.