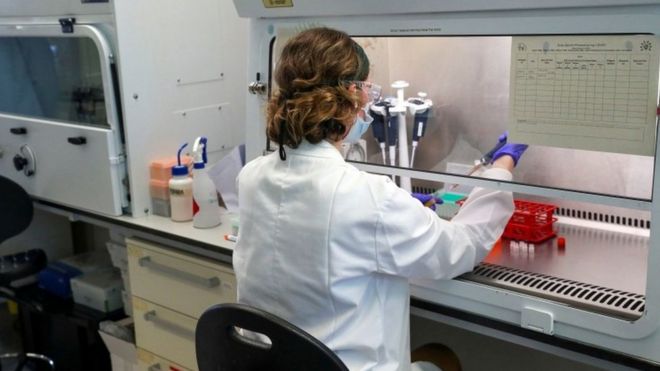 Final clinical trials for a coronavirus vaccine, developed by AstraZeneca and Oxford University, have been put on hold after a participant had a suspected adverse reaction in the UK.


Final clinical trials for a coronavirus vaccine, developed by AstraZeneca and Oxford University, have been put on hold after a participant had a suspected adverse reaction in the UK.

AstraZeneca described it as a "routine" pause in the case of "an unexplained illness".

The outcome of vaccine trials is being closely watched around the world.

The AstraZeneca-Oxford University vaccine is seen as a strong contender among dozens being developed globally.

Hopes have been high that the vaccine might be one of the first to come on the market, following successful phase 1 and 2 testing.

Its move to Phase 3 testing in recent weeks has involved some 30,000 participants in the US as well as in the UK, Brazil and South Africa. Phase 3 trials in vaccines often involve thousands of participants and can last several years.

The New York Times is reporting a volunteer in the UK trial has been diagnosed with transverse myelitis, an inflammatory syndrome that affects the spinal cord and can be caused by viral infections.

However, the cause of the illness has not been confirmed and an independent investigation will now work out if there was any link to the vaccine.

At first glance this may seem alarming. A vaccine trial - and not just any vaccine, but one receiving massive global attention - is put on hold due to a suspected serious adverse reaction. But such events are not unheard of. Indeed the Oxford team describe it as "routine". Any time a volunteer is admitted to hospital and the cause of their illness is not immediately apparent it triggers a study to be put on hold.

This is actually the second time it has happened with the Oxford University/AstraZeneca coronavirus vaccine trial since the first volunteers were immunised in April. An Oxford University spokesperson said: "In large trials, illnesses will happen by chance but must be independently reviewed to check this carefully."

A final decision on restarting the trial will be taken by the medical regulator the MHRA, which could take only days. But until then all international vaccination sites, in the UK, Brazil, South Africa and the USA are on hold.

The Oxford University team believe this process illustrates that they are committed to the safety of their volunteers and the highest standards of conduct in their studies.

Wellcome Trust director Sir Jeremy Farrar, an expert in infectious disease control, said there were often pauses in vaccine trials and it was important any adverse reactions were taken seriously.

"It is crucial that all that data is shared openly and transparently because the public must have absolute trust that these vaccines are safe and effective and, in the end, will hopefully bring the pandemic to a close," Sir Jeremy added.

UK experts have said a temporary pause could be seen as a good thing because it showed the researchers are prioritising the safety of vaccine above everything else.

People can develop side-effects from taking any drug but they can also fall ill naturally.

Where are we in the search for a vaccine?

US President Donald Trump has said he wants a vaccine available in the US before 3 November's election, but his comments have raised fears that politics may be prioritised over safety in the rush for a vaccine.

On Tuesday, a group of nine Covid-19 vaccine developers sought to reassure the public by announcing a "historic pledge" to uphold scientific and ethical standards in the search for a vaccine.

AstraZeneca is among the nine firms who signed up to the pledge to only apply for regulatory approval after vaccines have gone through three phases of clinical study..

They pledged to "always make the safety and well-being of vaccinated individuals our top priority".

The World Health Organization (WHO) says nearly 180 vaccine candidates are being tested around the world but none has yet completed clinical trials.

The organisation has said it does not expect a vaccine to meet its efficacy and safety guidelines in order to be approved this year because of the time it takes to test them safely.

Similar sentiments have been shared by Thomas Cueni, director-general of the International Federation of Pharmaceutical Manufacturers. The industry body represents the companies that signed the pledge.

Despite this, China and Russia have begun inoculating some key workers with domestically developed vaccines. All of them are still listed by the WHO as being in clinical trials.

Meanwhile, the US national regulator, the Food and Drug Administration (FDA), has suggested that coronavirus vaccines may be approved before completing a third phase of clinical trials.

Last week it also emerged that the US Centers for Disease Control and Prevention had urged states to consider waiving certain requirements in order to be ready to distribute a potential vaccine by 1 November - two days before the 3 November presidential election.

Although President Trump has hinted that a vaccine might be available before the election, his Democratic rival Joe Biden has expressed scepticism that Mr Trump will listen to scientists and implement a transparent process..