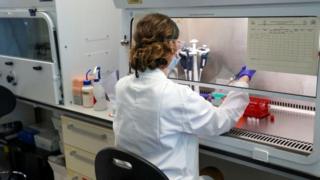 Trials of a Covid-19 vaccine being developed by AstraZeneca and Oxford University will resume after being paused due to a reported side effect in a patient in the UK.


Trials of a Covid-19 vaccine being developed by AstraZeneca and Oxford University will resume after being paused due to a reported side effect in a patient in the UK.

On Tuesday, AstraZeneca said the studies were being paused while it investigated whether the adverse reaction was linked with the vaccine.

But on Saturday, the university said it had been deemed safe to continue.

Health Secretary Matt Hancock welcomed the news that the trials would resume.

"This pause shows we will always put safety first. We will back our scientists to deliver an effective vaccine as soon as safely possible," he added.

The university said in a statement that it was "expected" that "some participants will become unwell" in large trials such as this one.

It added that the studies could now resume following the recommendations of an independent safety review committee and the UK regulator, the Medicines and Healthcare Products Regulatory Agency.

It would not disclose information about the patient's illness for confidentiality reasons, but the New York Times reported that a volunteer in the UK trial had been diagnosed with transverse myelitis, an inflammatory syndrome that affects the spinal cord and can be caused by viral infections.

The World Health Organization (WHO) says nearly 180 vaccine candidates are being tested around the world but none has yet completed clinical trials.

Hopes have been high that the vaccine might be one of the first to come on the market, following successful phase 1 and 2 testing.

Its move to Phase 3 testing in recent weeks has involved some 30,000 participants in the US as well as in the UK, Brazil and South Africa. Phase 3 trials in vaccines often involve thousands of participants and can last several years.

The government's chief scientific adviser, Sir Patrick Vallance, told the Downing Street press conference on Wednesday what had happened in the Oxford trial was not unusual.

The news comes after Prof Sir Mark Walport, a member of the government's scientific advisory group Sage, warned the UK was "on the edge of losing control of the virus".

He told BBC Radio 4's Today programme: "You've only got to look across the Channel to see what is happening in France and what's happening in Spain."

Official figures released on Saturday showed a further 3,497 people have tested positive with the virus in the UK. It is the second day in a row that number of daily reported cases has exceeded 3,000.

It brings the overall number of confirmed cases so far to 365,174. Meanwhile, the government figures revealed that a further nine people have died within 28 days of testing positive for Covid-19, bring the UK death toll to 41,623.

Official figures indicate the UK's coronavirus epidemic is growing again, after the R number - the reproduction rate of the virus - was raised to between 1 and 1.2 for the first time since March.

Meanwhile, daily coronavirus cases in Scotland have reached a four-month high, according to the Scottish government's latest data.

A total of 221 people tested positive for the virus in the past 24 hours - the highest daily figure since 8 May, when there were 225 positive tests.

New "rule of six" restrictions intended to halt the rises are due come into force on Monday.

In England indoor and outdoor gatherings of more than six people will be banned, except in certain circumstances such as for work or school. Those breaking the rules could be fined.

In Scotland, socialising will be limited to a maximum of six people inside and outside - but unlike England they must be from two households, and children under 12 are exempt.

In Wales, also from Monday, it will be illegal for more than six people from an extended household to meet indoors - but up to 30 can still meet outdoors.

Localised restrictions for parts of Northern Ireland, including Belfast and Ballymena, are to come into force on Monday, aimed at reducing contacts between people in homes in the affected areas.

He told BBC Radio 4's Today programme: "I don't want to see fines being levied, but even more I do not want to see people behaving in a way that puts the most vulnerable at risk."