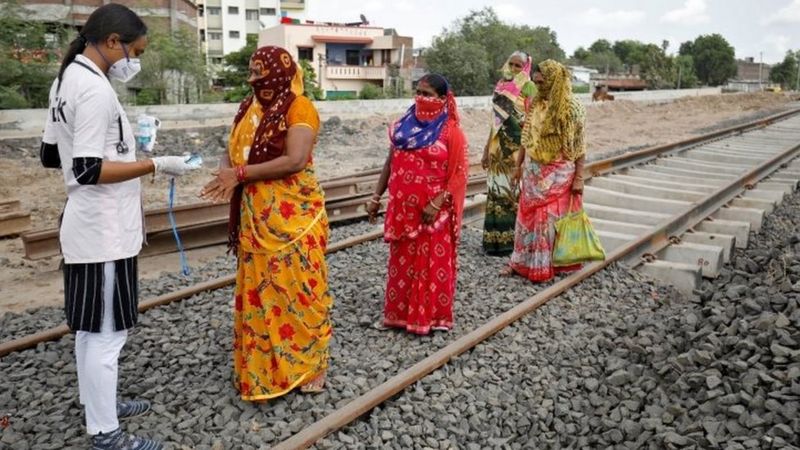 The number of confirmed coronavirus infections in India has surpassed five million, officials say, the second-highest in the world after the US.


The number of confirmed coronavirus infections in India has surpassed five million, officials say, the second-highest in the world after the US.

The virus appears to be spreading much faster in India than any other country, with daily cases crossing 90,000 for the five days up until Tuesday.

More than 80,000 people have died, amid reports of shortages of intensive care beds and oxygen supplies.

But the death rate is lower than in many countries with a high caseload.

The rise in infections comes as the government continues to lift restrictions throughout the country to try to boost an economy that lost millions of jobs when the virus hit in March.

Gyms are the latest to reopen, while schools, colleges and cinema halls remain shut. But most workplaces and markets are back to normal, and many cities are permitting restaurants and bars to resume serving alcohol, which is likely to increase crowds.How did India get here?

In the initial stages of Covid-19, India appeared to be doing fairly well, imposing a strict lockdown, but the virus then hit megacities like Mumbai and the capital, Delhi, before surging in smaller cities and rural areas.

Despite the increase, the government has eased restrictions to recover from the effects of an early lockdown - between March and June - that hit the economy hard.

As India opens up and people return to work, Covid-19 cases have been surging. Some 600,000 cases were added just last week.

Although the virus has spread to every corner of the country, including the remote tribe in India's Andaman islands, the bulk of the caseload is coming from five states.

But the rise in case numbers is partly also a reflection of increased testing - India has been conducting more than a million tests a day.

What about reported oxygen shortages?

With the rise in number of cases, demand for oxygen has risen exponentially recently.

Hospitals and care centres have been consuming up to 2,700 tonnes of oxygen every day this month, compared with 750 tonnes in April, according to data obtained from All India Industrial Gases Manufacturers Association.

Oxygen manufacturers say the demand for industrial oxygen has also shot up because more factories are now reopening.

It is a lives-versus-livelihoods question that India is grappling with now, BBC India correspondent Soutik Biswas reports. India will now need to increase capacity to make sure that both industries and patients do not suffer, our correspondent adds.

Most oxygen plants are built near cities and big towns. So supplies to far-flung districts where Covid-19 patients are filling hospitals have to be sent by special lorries carrying cryogenic tanks - India has some 1,500 such vehicles.

Many areas - the capital, Delhi, for example - do not have a single oxygen manufacturer, and all supplies have to come from neighbouring regions.

Why is India's death rate so low?

India has reported 82,066 Covid-19 deaths so far, and has been recording around 1,000 deaths daily in recent weeks.

While that's the world's fifth-highest tally in absolute numbers, it amounts to about 60 deaths per million of the population. And India's case fatality rate, a measure of deaths among Covid-19 patients, is just 1.6%. For the US, it is about 3% and UK's is around 11%.

Many epidemiologists attribute the low death rate to a young population. Other South Asian countries with young populations are also reporting low mortality rates - some even lower than India's.

Some experts also believe that several states are undercounting deaths. And they also cite the fact that a handful of states are heavily attributing Covid-19 deaths to patients' underlying conditions or co-morbidities.

But they add that it's hard to measure the scale of undercounting without reliable historical data and calculation of excess deaths.