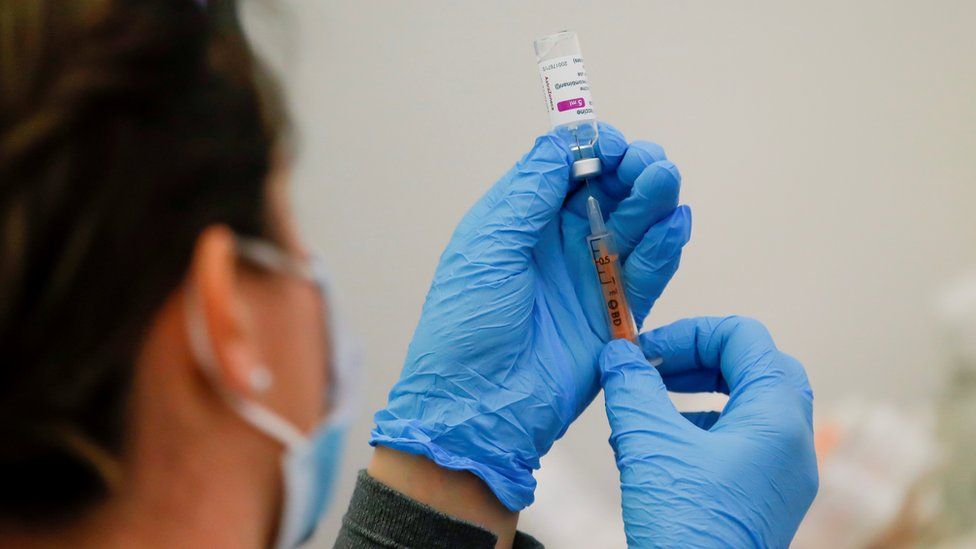 A trial of the Oxford-AstraZeneca Covid vaccine on children has stopped giving out jabs while the UK's medicines regulator investigates a possible link with rare blood clots in adults.


A trial of the Oxford-AstraZeneca Covid vaccine on children has stopped giving out jabs while the UK's medicines regulator investigates a possible link with rare blood clots in adults.

Prof Andrew Pollard from the University of Oxford told the BBC there were no safety concerns with the trial itself, but its scientists were waiting for further information.

Around 300 volunteers signed up.

Earlier, PM Boris Johnson said people should get their jab when invited.

Two vaccines - developed by Oxford-AstraZeneca and Pfizer-BioNtech - are being used in the UK, while a third - from Moderna - has been approved.The trial of the Oxford-AstraZeneca vaccine on children, which started in February, is assessing whether the jab produces a strong immune response in those aged between six and 17.

Its suspension comes after a European Medicines Agency (EMA) official, speaking in a personal capacity, said there appeared to be a link with the jab and rare blood clots.

Confirming that the trial on children was being paused, Prof Pollard said: "Whilst there are no safety concerns in the paediatric clinical trial, we await additional information from the MHRA on its review of rare cases of thrombosis/thrombocytopaenia that have been reported in adults, before giving any further vaccinations in the trial."

Participants are advised to continue to attend all scheduled visits and can contact the trial sites if they have any questions.

Updates from the EMA and the UK's regulator, the Medicines and Healthcare Products Regulatory Agency (MHRA), are expected in the coming days.

The EMA said its safety committee had "not yet reached a conclusion and the review is currently ongoing".

The MHRA says the benefits of the jab continue to outweigh any risk.

All medicines, from vaccines to paracetamol, have the potential to cause severe side effects.

The seasonal flu jab has around a one-in-a-million chance of causing the nerve disorder Guillain-Barre syndrome, for example.

The key question is whether the risks are worth the benefits.

Even if the vaccine was the cause, and this is still not proven, the numbers suggest around one death in every 2.5 million people vaccinated in the UK.

For everyone over the age of 75 infected there is one death per eight Covid infections.

So on the face of it, the risk-benefit ratio is clearly in favour of vaccination - if you assume you are going to be infected at some point.

But what is needed now is more information about who has been suffering from these rare blood clots. How old are they? Do they have any underlying health conditions that could explain what happened?

This will help narrow down the scale of any potential risks.

An update from the UK regulator - as well as the European one - is expected in the coming days.

During a visit to the AstraZeneca manufacturing plant in Macclesfield, Cheshire, earlier on Tuesday, Mr Johnson defended its vaccine.

"On the Oxford-AstraZeneca vaccine, the best thing people should do is look at what the MHRA say, our independent regulator - that's why we have them, that's why they are independent," said Mr Johnson, who has received the first dose of the vaccine himself.

"Their advice to people is to keep going out there, get your jab, get your second jab."

The prime minister added: "The best thing of all is to vaccinate our population, get everybody out getting the jab, that's the key thing and that's what I would advocate, number one."

The MHRA is investigating reports of a very rare and specific type of blood clot in the brain, known as cerebral venous sinus thrombosis (CVST), occurring together with low levels of platelets (thrombocytopenia) following vaccination.

A number of countries have suspended the use of the Oxford-AstraZeneca jab among younger people, including in Germany, which has paused it for people aged below 60, and Canada, where the jab is not being given to those under 55.

In total, the UK has secured 457 million Covid vaccine doses, of which 100 million are from AstraZeneca. Vaccines from Moderna will be deployed in the UK "around the third week of April", Vaccines Minister Nadhim Zahawi has said.

The MHRA has said it identified 30 cases of rare blood clot events out of 18.1 million doses of the jab administered up to and including 24 March. There have been seven deaths among the 30 cases.

But the regulator's chief executive Dr June Raine said: "People should continue to get their vaccine when invited to do so.

"Our thorough and detailed review is ongoing into reports of very rare and specific types of blood clots with low platelets [the cells involved in clotting] following the Covid-19 vaccine AstraZeneca.

"No decision has yet been made on any regulatory action."

One of the members of the Joint Committee on Vaccination and Immunisation - which advises the government on the jab rollout - told the BBC's Newsnight that the issue was being taken seriously and "we do need to get to the bottom of this".

Professor Adam Finn, who was speaking in a personal capacity, said the trial of the jab on children was paused as a "precautionary measure" while they wait for clearer information, rather than because any problems had occurred.

Asked if his opinion on the vaccine had changed in the last fortnight, Prof Finn cited thromboses being associated with low platelet count and a lack of associated cases with the Pfizer vaccine as being of particular concern.

"So those two things do raise the serious possibility that this could be a causal link and certainly means we need to take it very seriously and understand it more clearly," he said.

"I think personally it's surprising that we haven't seen any cases with Pfizer if it's simply uncausal so that's one of the reasons we're concerned about this."

There have been a further 2,379 coronavirus cases in the UK and another 20 deaths within 28 days of a positive Covid test, according to the latest government figures.