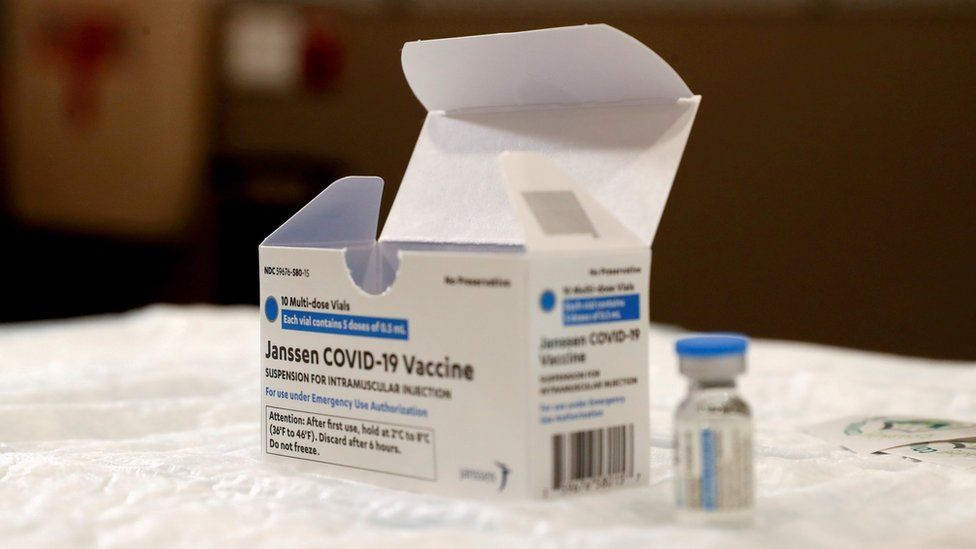 A single-dose Covid vaccine made by Janssen has been approved for use in the UK by the medicines regulator.


A single-dose Covid vaccine made by Janssen has been approved for use in the UK by the medicines regulator.

The vaccine was 85% effective in stopping severe illness from Covid-19 in trials and has met expected safety standards.

Twenty million doses have been ordered for the UK and will arrive later this year.

It will be the fourth vaccine to be used in the UK to protect against Covid-19.

More than 38 million people have now received a first dose of a vaccine in the UK - nearly three-quarters of the adult population.

The vaccine can be given to people aged 18 and over and is likely to be used as a booster jab for care home residents ahead of winter because it can be easily stored and transported at fridge temperatures.

The UK's Joint Committee on Vaccination and Immunisation (JCVI) will produce advice on exactly who should receive the Belgian-made jab in due course.

The single-dose option has already been authorised by the European Medicines Agency (EMA), the Food and Drug Administration (FDA) in the US and the World Health Organization (WHO).Nadhim Zahawi, vaccine deployment minister, said the Janssen jab would be "another weapon in our arsenal to beat this pandemic".

"We are doing everything we can to vaccinate all adults as quickly as possible and I encourage everybody to come forward for a jab as soon as they are eligible."

First Minister Nicola Sturgeon said the approval was "really good news" but "we're focused right now on the supplies we actually have and getting them into people's arms as quickly as possible", she said.

Originally, the UK ordered 30 million doses but reduced its order after the vaccination programme in the UK picked up pace.

The vaccine, developed by Johnson & Johnson's pharmaceutical arm, Janssen, uses the same technology as the Oxford-AstraZeneca one and is likely to be more suitable for older adults than younger people. Under-40s are being offered an alternative to AstraZeneca in the UK because of a potential link to a type of rare blood clot in the brain.

Both vaccines use a modified version of a different virus to deliver instructions to the body's cells to fire up the immune system and produce antibodies.

Since the Janssen jab is given as one single dose, it could speed up rollout to vulnerable people in care homes and those living in remote locations.

It has not yet been tested against the variant first detected in India which is spreading fast in the UK, although at low levels.

The US, South Africa and the European Union briefly paused the rollout of the Janssen vaccine in April after reports of rare blood clots in very small numbers of people after their jab.

The US is now offering the vaccine to people over 18, after concluding that the benefits of using it outweighed any risks of side-effects. The European Medicines Agency (EMA) came to the same conclusion after looking at a potential link between the vaccine and clots.

The Janssen jab is currently being tested as part of a UK study to find out whether a third dose could protect against new variants.

Dr June Raine, head of the body which approves vaccines in the UK - the Medicines and Healthcare products Regulatory Agency (MHRA) - said information on quality, safety and effectiveness of the Janssen jab had been thoroughly reviewed.

"We now have four safe and effective vaccines approved to help protect us from Covid-19," she said, adding that their work did not end there.

"We are continually monitoring all Covid-19 vaccines in use once they have been approved to ensure that the benefits in protecting people against the disease continue to outweigh any risks.

"The safety of the public will always come first - you can be absolutely sure of our commitment to this."

The MHRA said pregnant or breast-feeding women should decide whether to have the Janssen option in consultation with a healthcare professional after considering the benefits and risks.

There have been a further 10 deaths within 28 days of a positive test for coronavirus and another 4,182 confirmed cases on Friday.