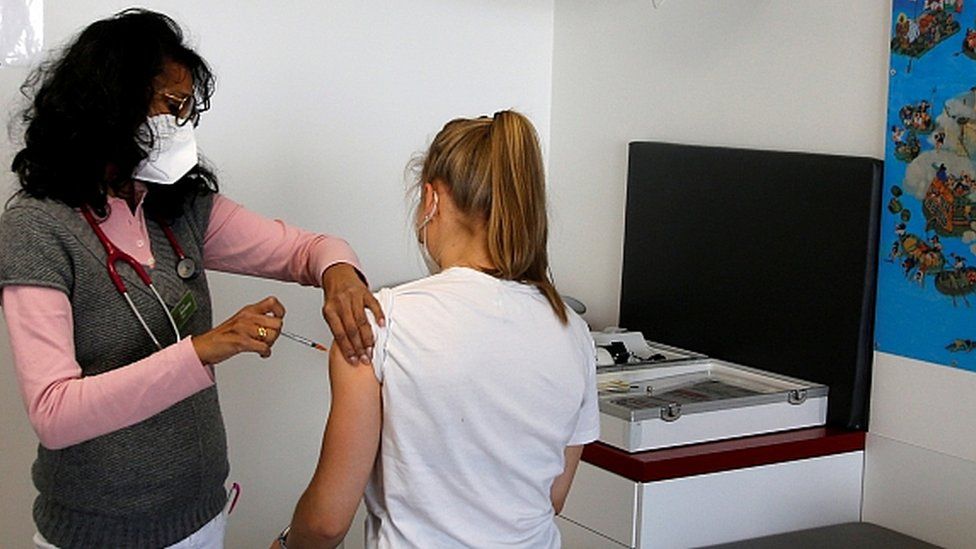 The EU's medicines agency (EMA) has approved the Pfizer-BioNTech vaccine for 12-15 year olds - the first jab allowed for this age group in the bloc.


The EU's medicines agency (EMA) has approved the Pfizer-BioNTech vaccine for 12-15 year olds - the first jab allowed for this age group in the bloc.

Individual member states must now decide if they will offer the jab to children. German leaders gave the green light on Thursday.

The US and Canada approved the Pfizer jab for adolescents earlier this month.

Friday's announcement came as the World Health Organization (WHO) said Europe needed to speed up its vaccine rollout.

WHO Europe director Hans Kluge warned that the pandemic would not be over until at least 70% of the population had been vaccinated.

What is EMA's evidence on vaccinating children?

Marco Cavaleri, the EMA's head of vaccine strategy, said the 12-15 age group would require two doses with an interval of at least three weeks.

He said trials showed that the Pfizer vaccine was "highly preventative" for Covid-19 in children.

"From a safety perspective, the vaccine was well tolerated and the side effects in this age group were very much similar to what we have seen in young adults and not raising major concerns at this point in time," he added.

The EU has already approved the Pfizer vaccine for those aged 16 and older.

German federal and state leaders agreed on Thursday that children over 12 could start receiving Covid jabs from 7 June.

Chancellor Angela Merkel said the vaccine would not be compulsory for teenagers and one survey suggested that only 51% of parents wanted their children to have the jab.

Florian Hoffmann, the head of Germany's Association for Intensive and Emergency Medicine, has said that adults should be prioritised "because they have a much higher risk of getting a serious course of the virus which could see them end up in intensive care".

Why is the WHO concerned?

Earlier on Friday, the WHO's Hans Kluge warned that the vaccine rollout across Europe was still "too slow".

"The pandemic will be over once we reach 70% minimum coverage in vaccination," he told AFP news agency.

Mr Kluge said he remained concerned about the increased contagiousness of new variants, adding that speed was of the essence.

"Our best friend is speed, the time is working against us. We need to accelerate, we need to enlarge the number of vaccines."

France is to open up vaccinations to everyone aged over 18 from 31 May, the government has said. Until now only adults aged 50 and over have been eligible.

Canada was the first country in the world to authorise the use of the Pfizer vaccine for children between 12 to 15, saying it made the decision based on data from phase three clinical trials.

The US Food and Drug Administration (FDA) followed suit days later, calling it "a significant step in the fight against the Covid-19 pandemic".