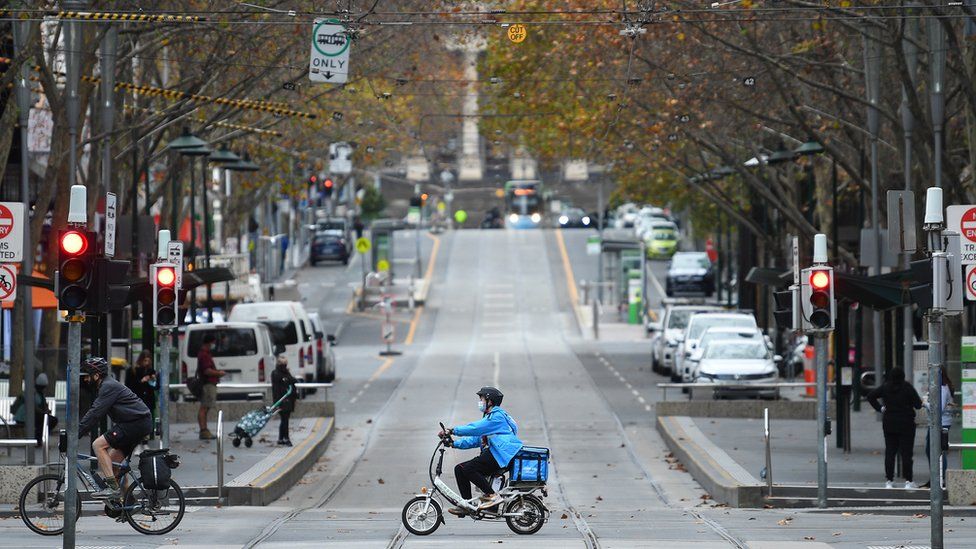 The Australian state of Victoria will extend its lockdown by another week as authorities battle to control a growing virus outbreak.


Officials say people have been catching the virus from "fleeting" encounters in a Melbourne outbreak of the B.1.617.1 strain, now named the Kappa variant by the World Health Organization.

Australia's second most-populous state will now be locked down until 10 June.

It's the fourth shutdown endured by residents so far in the pandemic.

Six new local cases were reported on Wednesday, taking the cluster to 60.

"I know this is not the news that everybody wants to hear but given the cases we have... the government had no choice," said Acting Premier James Merlino.

"If we don't do this [lockdown], this thing will get away. This variant of concern will become uncontrollable and people will die."

Nearly seven million people have been in lockdown since 27 May, after the state recorded its first cases in the community in nearly three months.

For another seven days, people in the state capital Melbourne will be required to stay at home except for essential work, shopping, exercise, caregiving or to get a Covid vaccine.

No gatherings are allowed. Some measures have been eased including the expansion of travel limits to within 10km (6.1 miles) of the home, and senior school students will be allowed to return to the classroom.

Outside the state capital, restrictions will be relaxed for regional towns with limited outdoor gatherings and the re-opening of restaurants.

But Mr Merlino warned people to remain cautious. He said there are more than 350 places where people may have been exposed to the virus, including camping spots in the neighbouring state of New South Wales after a Melbourne resident travelled there.

"No one - no one - wants to repeat last winter," he said, referencing Melbourne's second wave last year which caused over 90% of deaths nationwide.

The state endured a 112-day lockdown to bring the case rate back to zero.

Victoria's new outbreak has highlighted the low level of vaccination among Australians - a task that has been the responsibility of the federal government.

Less than 2% of the population has been vaccinated. Cases reported in aged care homes in Melbourne this week have also fuelled criticism of the flawed rollout.

The government had pledged it would prioritise vaccines for vulnerable groups like the elderly, but was forced to admit yesterday it did not know how many vaccinations had occurred in aged care homes amid reports of widespread delays.

The Victorian outbreak marks the biggest case increase in Australia since October.

The nation has largely avoided the level of Covid deaths seen in many other developed nations due to a stringent system of snap lockdowns, border controls and movement restrictions.

Officials say this outbreak has been traced to a traveller who tested positive days after finishing quarantine in South Australia.

It's believed he contracted the virus through airborne transmission from an infected traveller in another room- throwing up questions over the safety of hotel quarantine.