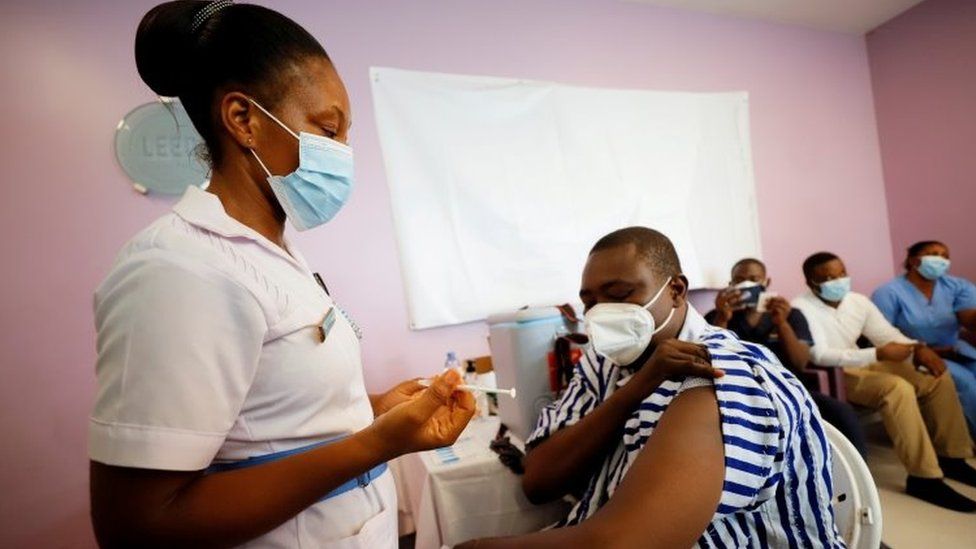 There are fresh calls for the UK to show "historic leadership" and start sharing its vaccine doses with the world right now.


There are fresh calls for the UK to show "historic leadership" and start sharing its vaccine doses with the world right now.

The country is hosting this year's G7 summit, where seven of the world's most powerful countries will come together in Cornwall next week. The Covid pandemic will be high on the agenda.

In an open letter to UK Prime Minister Boris Johnson, the heads of the Wellcome Trust and Unicef in the UK are warning that hard earned freedoms in the country will be "short lived" if enough people in other countries are not vaccinated too.

The letter says decisions at the summit "will define the 21st Century", and calls on Mr Johnson and other G7 leaders to "rise to this challenge and end this crisis for good".

The UK says it has no surplus supplies to share at the moment, but will donate doses when it does.

But Unicef says the UK and the other G7 countries could share 20% of their supplies in the next three months without impacting their own domestic rollouts.

Ever since India stopped exporting Covid vaccines because of the crisis there, countries in Africa have been counting down their last doses.

"It is deeply unfair," says Dr Phionah Atuhebwe, who is in charge of new vaccine introductions for the World Health Organization (WHO) in Africa.

"Of the almost two billion doses that have been administered globally, sub-Saharan Africa has received about 1% of all these vaccines."

She says 18 African countries have either already run out of doses or are about to, including:

It's a massive blow to many low and middle income countries.

In Ghana, there's been a very successful rollout of the first dose of vaccines for the most at risk groups, including health workers. Their second doses are now due - but officials are unclear on when they will arrive.

Meanwhile, richer countries have bought up the lion's share of global supplies and are pushing full steam ahead with their vaccination programmes, now administering doses to much lower-risk groups including teenagers.

The UK, US and Canada have vaccinated more than half of their populations, while in Germany, Italy and France the numbers are over 30%.

Japan's uptake has been much slower, but not because they're short on supplies.

Whereas some countries in Africa have yet to vaccinate a single person, including health workers looking after Covid patients on the front line.

The international vaccine equality scheme Covax, which is providing vaccines to some of the world's poorest countries, is currently 190 million doses short.

In the open letter, Wellcome's Prof Sir Jeremy Farrar and Unicef UK's Steven Waugh said that because high income countries - including the UK and G7 - have most of the world's Covid vaccine supplies, they "are the only ones who can makes doses available right now".

Wellcome and Unicef UK are calling for G7 countries to donate 20% of their doses in June, July and August to help plug the massive gap.

For the month of June that works out as:

"If we do not get… doses, we get back to the virus circulating and possibly mutating yet again, coming up with new variants that affect the world and take us all back to square zero," says Dr Atuhebwe.

So far France and New Zealand are the only nations to have already started diverting some of their own supplies to poorer countries.

In the open letter, the authors called on the prime minister to "make that pledge a reality".

But speaking at the G7 health ministers meeting in Oxford this week, Health Secretary Matt Hancock said there were no plans to do that, yet.

"The UK vaccination programme has very much been based on delivering vaccines as soon as they're delivered to us," he said.

"So we don't have excess doses at the moment. But absolutely we want to lean in to this global effort, when there is spare capacity."

In the latest round of pledges this week, countries have promised another $2.4bn (£1.7bn) to the Covax scheme to help get vaccines into poorer countries.

But with manufacturing unable to keep up with demand, and a few rich countries hoarding current supplies - it's the world's poorest who remain last in line.

That in turn could mean deadlier versions of a mutated version of Covid-19 ending up back on the shores of wealthier nations.