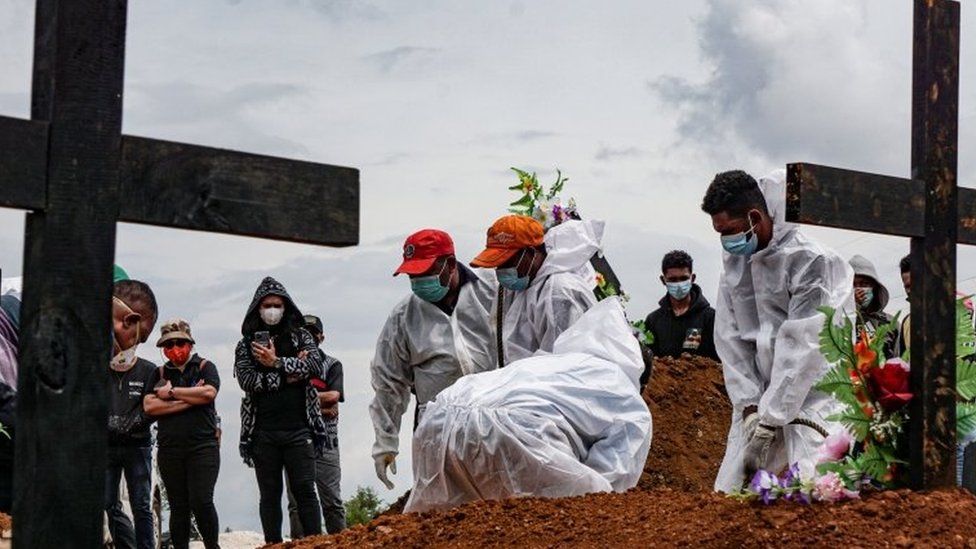 The Delta variant of Covid-19 has now been detected in 124 territories worldwide, the World Health Organization (WHO) says.


The Delta variant of Covid-19 has now been detected in 124 territories worldwide, the World Health Organization (WHO) says.

It is expected to become the dominant variant globally in the coming months, with the WHO predicting that there could be more than 200 million confirmed cases within a matter of weeks.

Infections are rising, particularly in Europe and the western Pacific region. Some Western countries have started to ease restrictions as death rates have dropped. But those without access to vaccines or with a slower vaccine rollout are facing a deadlier threat.

Here, BBC journalists around the world give a sense of the toll the Delta variant is taking and what impact its spread could have.

With more than 1,300 deaths in a day, Indonesia has become Asia's new Covid epicentre. Hundreds of people have died in self-isolation - possibly because they could not get immediate treatment or were turned away by overwhelmed hospitals.

Wirawan, a firefighter in the capital city of Jakarta, sees the worsening crisis first-hand. He and his team are tasked with picking up bodies from homes before finally delivering them for burial. Before the latest spike in cases, he arranged two or three funerals a day. Now, he gets calls for up to 24 funerals a day.

That's more than he can handle, so the bodies need to wait.

The country is recording more than 50,000 new daily cases, and the government is keeping emergency restrictions until at least the end of this week. It is likely to extend the measures on Monday.

As the new highly transmissible Delta variant, which was first detected in India, continues to ravage the country, Indonesia is racing to vaccine its people. From 208 million people eligible for vaccines, only around 16 million have received both doses.

What is the Delta variant?

Tunisia is now witnessing the most devastating impact of Covid since the global pandemic took hold.

It's not known whether most of the new infections are the Delta variant specifically, but case numbers grew after its known arrival here.

Hospitals across the country are completely overwhelmed, with some medics filmed crying over a shortage of oxygen concentrators as they are forced to decide who lives and who dies.

Infection rates are soaring, and the vaccination campaign has been very slow with less than 8% of the population fully jabbed. Rights organisations have accused the government of mismanaging the crisis, and on Tuesday the health minister was sacked.

In recent days, Tunisia's national telecoms agency has offered 1GB of free internet for those who follow a mobile text prompt to register for a vaccine. At least one known pizza place in Tunis offered a 10% discount if customers showed proof of vaccine registration.

The situation could turn a corner next month after Tunisia received donations of vaccines, oxygen tanks and other medical supplies from European and Arabic countries, with several countries pledging to deliver more aid.

Mexico - People tire of the crisis

Mexico is facing its third wave of the pandemic. The number of infections has risen to more than 15,000 a day, reaching the peak we saw at the beginning of the year.

Authorities are concerned about the advance of the Delta variant, which in the capital Mexico City already accounts for around 60% of cases.

The government admitted that the spread of this variant in Mexico and the US is the reason they have extended the closure of the land border between the two countries to non-essential travel.

Most of those affected in Mexico are young and unvaccinated people. Only one in four over 18 year-olds in the country are fully vaccinated.

But with 65% of beds available, hospitals do not show for now the collapse seen in the worst moments of the pandemic.

In the streets, the feeling is almost of apparent normality among a population exhausted by this crisis. Many of them must leave home daily to work selling food or in other informal jobs, in order to earn the money they need to survive.

This is why the government does not plan to increase restrictive measures or shut down economic activities once again, despite the risk of Delta.

Until recently, Rwanda had been praised for its swift and strong measures to contain the virus.

But since mid-June, the virus has hit harder. Cases and deaths have spiked to record highs week after week. By early July, all Covid treatment centres were said to be full.

"We have never been here before in this pandemic," the health minister told the state broadcaster on 6 July. Two days later he confirmed the arrival of the faster spreading and deadlier Delta variant, and by 25 July the variant made up nearly 57% of samples sequenced.

On 17 July, the country announced a 10 day lockdown in the capital Kigali and eight districts to try to halt virus. Cases and casualties, however, remain relatively high.

More than 400,000 people are fully vaccinated - around 3% of Rwanda's population.