Covid: Australia to get Pfizer doses from UK in vaccine swap 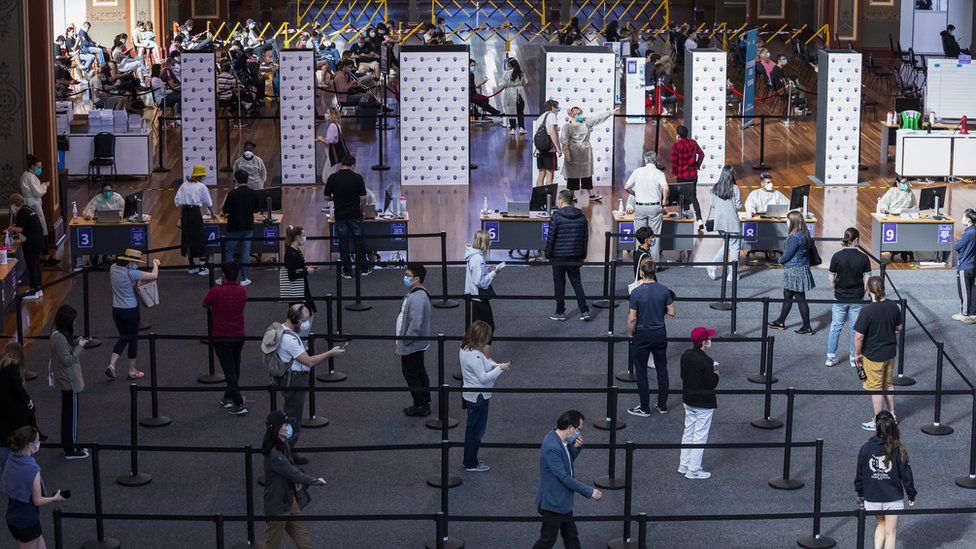 
Australia says it has secured an extra four million doses of the Pfizer vaccine from the UK in a swap deal.

Prime Minister Scott Morrison said the extra vaccines would help his country come out of its lockdowns sooner.

About half of Australia's population is currently in lockdown due to outbreaks in the cities of Sydney, Melbourne and Canberra.

Under the deal, Australia will send the same amount of doses back to the UK later in the year.

Australia has ramped up vaccination rates in recent weeks, after drawing criticism for a slow rollout.

Mr Morrison said the Pfizer doses would leave for Australia on Saturday.

"This will enable us to bring forward significantly the opportunity for Australia to open up again," he told reporters on Friday.

Mr Morrison's government has drawn criticism for failing to secure more Pfizer doses early on, and for not better addressing public concerns about rare clotting from the AstraZeneca vaccine.

Currently, 36% of the eligible population is fully vaccinated - a level among the lowest of OECD nations. But Australia is now administering doses at a rate higher than peaks seen in the UK and US.

It is aiming to ease out of lockdowns when adult coverage targets hit 70%, with plans to re-open schools, businesses and state borders.

Based on current rates, that could occur around mid-October.

When vaccine levels reach 80%, Australia also plans to re-open to vaccinated travellers from designated safe nations, including the UK.

But plans to re-open have also drawn controversy, particularly among the majority of Australian states with no current Covid cases.

Queensland and Western Australia have indicated they are unwilling to re-open their borders amid current case rates in Sydney.

Sydney reported over 1,400 new cases and 12 deaths on Friday.