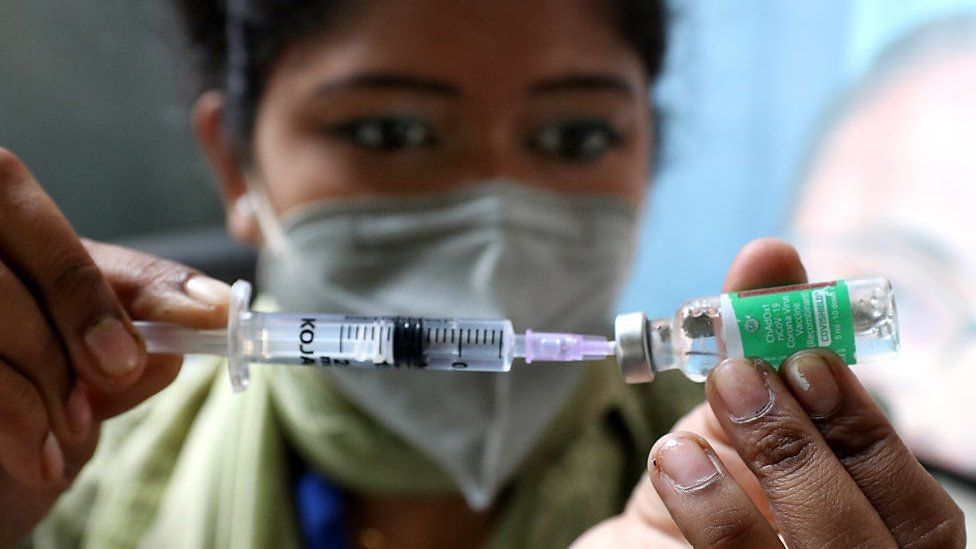 The UK government has amended its foreign travel guidance to clarify that the Indian-made version of the AstraZeneca vaccine is an approved jab.


The UK government has amended its foreign travel guidance to clarify that the Indian-made version of the AstraZeneca vaccine is an approved jab.

But it is not clear whether people from India can travel to the UK without having to self-isolate for 10 days.

The UK's refusal to recognise Covishield had triggered a firestorm of protests in India.

With more than 721 million doses administered so far, Covishield is India's primary vaccine.

On Tuesday, India described the rule as "discriminatory" and asked the UK to stop requiring fully-vaccinated Indians to self-isolate on arrival.

At present, India is not listed as a country where people are recognised as fully vaccinated even if they've had both doses of an approved jab.

So, Indians travelling to Britain have to self-isolate as well as book and take Covid-19 tests before they are allowed to move freely.

Last week, the UK announced new rules - which will come into effect on 4 October - which mandate that travellers from a number of countries arriving in England do not have to self-isolate if they are fully vaccinated. India was not included in that list either.

Prominent Indians called the rule "highly discriminatory", "racist" and "asinine", among other things.

It is "a discriminatory policy and does impact our citizens travelling to the UK", Mr Shringla told reporters. He had warned that India might take "reciprocal measures" if the UK did not address India's concerns.

Such measures generally include India imposing similar restrictions on those arriving from Britain. British travellers to India are thermally screened for fever on arrival, and provide a negative Covid-19 test. They do not need to quarantine.

A leading MP from the main opposition Congress party, Jairam Ramesh, had tweeted that the "bizarre" decision "smacked of racism".

Shashi Tharoor, author and Congress party MP, said he had cancelled a planned tour to participate in a debate at Cambridge University and to promote his new book in protest against the move.

"Why should Indians be deemed to be lesser breeds than others? It is deeply offensive that fully vaccinated Indians have to quarantine, while others who may have taken the same vaccine in other countries, do not," Mr Tharoor wrote in The Quint.

"The UK has done its image in India a profound disservice by failing to offer clarity on the question at the heart of the issue."

About 25% of adults in India have been fully vaccinated so far - an estimated 150 million have received both doses of Covishield at home.

The Serum Institute of India - the world's biggest vaccine manufacturer which makes the jab under licence from AstraZeneca - has also supplied millions of doses to countries in Asia, Africa and Latin America under deals signed with various governments and as part of the global Covax scheme for poorer countries.

In July, British PM Boris Johnson said he was "very confident" there "will not prove to be a problem" for travellers who had received an Indian-made Covid jab. Downing Street said the UK's medicines regulator had shared its data on the jab with its European counterpart. Vaccine expert Prof Adam Finn said the vaccines - AstraZeneca and Covishield - were "exactly the same stuff". And 23 countries of the European Union have approved the Covishield jab.

"There seems to be no obvious explanation [behind the rule]. Clearly different standards are at play, depending on which part of the world the traveller is coming from," says Amitabh Kant, CEO of Niti Aayog, an Indian government-backed think-tank.

Did the move have something to do with some reports of fake vaccines? WHO had reported that counterfeit versions of Covishield were seized by authorities in India and Africa between July and August and called for their removal from circulation.

Or does the rule have something to do with India's "dodgy documentation", as Mr Tharoor quoted a source as telling him.

In other words, there were concerns about whether the vaccination certificates produced by Indian travellers were genuine or not.

Earlier this month, Check Point, a leading US-based cyber security company, reported that there was a surging black market in vaccine certificates on Telegram in 28 countries. (This followed US President Joe Biden's vaccine mandate announcements.) In India, these certificates were selling for $75 apiece, the firm reported.

A spokesperson for the British High Commission in India told the BBC that its government was "working with India to expand recognition of vaccine certification".

Mr Tharoor says the Indian certificates carry QR codes which can be verified and there "may be some other ways of confirming tangible evidence" of their authenticity. "Making it such a stumbling block reeks of bad faith," he says.

Meanwhile, Indian travellers bound for the UK are distraught and say it is "ridiculous" to be in quarantine despite being fully vaccinated. Those who have travelled to Britain continue to self-isolate for 10 days and get tests done at their own expense.

"Why are they discriminating against our vaccines? This is all adding more stress to what is an already stressful time and adding to our costs," says Hema Anand, mother of a student who has travelled to the UK and is now in self-isolation.