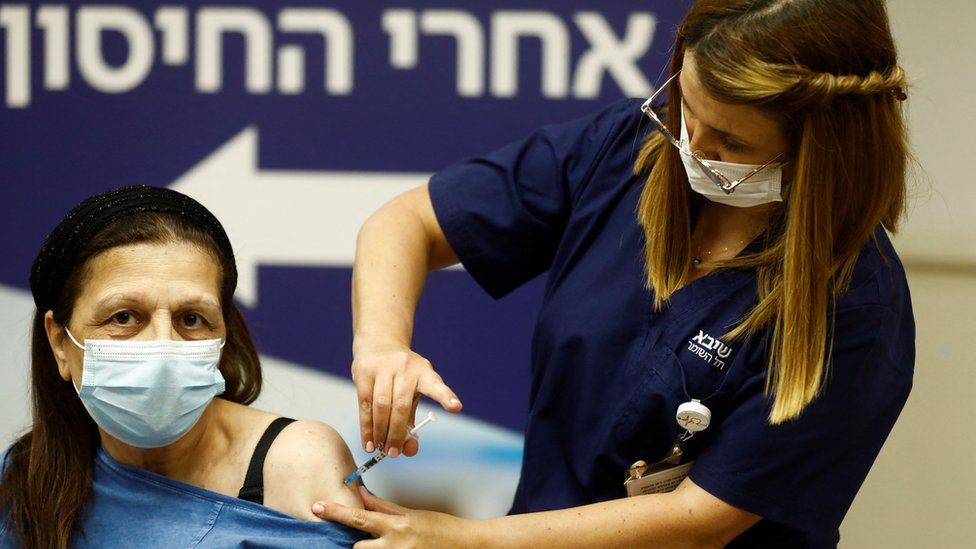 Nachmann Ash said the country would pay a price for this and he wanted to see herd immunity achieved via vaccinations instead.

Modellers have warned that up to four million people could be infected by the end of January.

Prime Minister Naftali Bennett has admitted his current policy will not prevent a big rise in infections.

On Sunday, he said a fourth Covid-19 vaccine would be offered to people over 60 as well as medical staff.

The prime minister has previously insisted the aim is to prevent a spike in serious illness while keeping the economy open, even though he has not ruled out another lockdown.

Confirmed daily infections in Israel have quadrupled to more than 3,500 in 10 days, but the number of deaths has not seen a similar rise.

Herd immunity is a scientific term describing the point at which a population is protected from a disease, either by enough people being vaccinated or by people having developed antibodies by having the disease.

Prof Ash said a surge in Omicron cases was inevitable.

"The price of herd immunity is very many infections, and that may end up happening. The numbers need to be high to reach herd immunity, it's something that is possible," he said.

"But we don't want to reach it by means of infections, we want it to happen as a result of many people vaccinating."

"We have to be very cautious with this particularly in light of our experience over the past two years in which we saw people who have recovered be re-infected," Mr Zarka told the Ynet news website.

He predicted that between two and four million people would be infected over the coming three weeks - but that a lower number of people would suffer severe illness than in the previous wave.

He urged people to get vaccinated.

"Everyone who walks around, no matter where, will be exposed and should be protected," he tweeted.

About two-thirds of Israel's population of more than nine million have been fully vaccinated, which the health ministry defines as having either had a third dose or recently had a second dose.

However many of those eligible for a third dose have not yet had one.

Israel has already approved a fourth vaccine dose for immuno-compromised people and the elderly in care homes.

Meanwhile just over a quarter of Palestinians have been fully vaccinated, according to Our World In Data.

The Palestinians have received vaccine doses from Israel, Russia, China, the United Arab Emirates and the global Covax vaccine-sharing initiative.

UN experts had been critical of Israel's failure to fully extend its vaccination programme to Palestinians under its control.