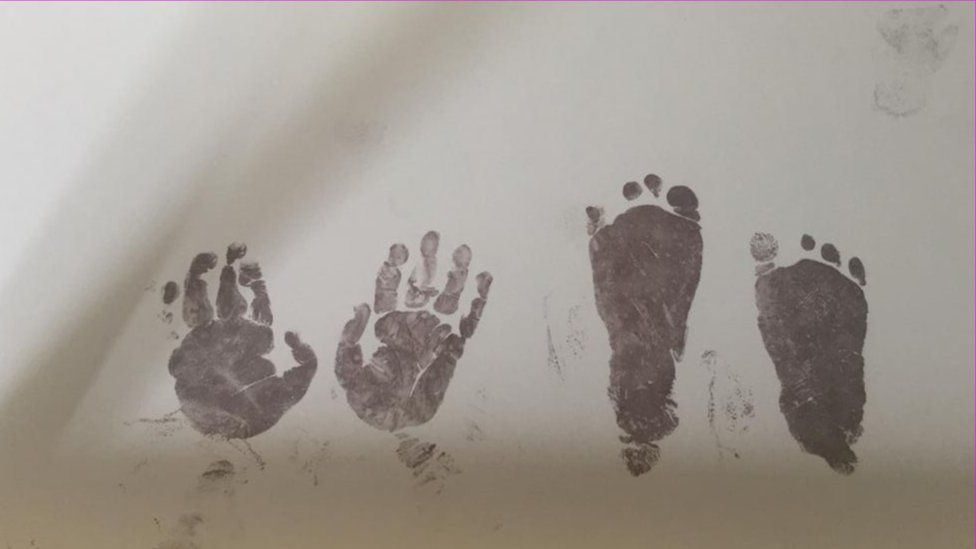 Tens of thousands of women in the UK may be experiencing symptoms of post-traumatic stress disorder (PTSD) after miscarriages each year, a leading researcher warns.


Tens of thousands of women in the UK may be experiencing symptoms of post-traumatic stress disorder (PTSD) after miscarriages each year, a leading researcher warns.

But he says most are not given prompt psychological support that could help prevent PTSD developing.

His team is trying out a variety of new approaches - including virtual reality - to help address the issue.

Kellie's story: 'I felt so alone after my baby died'

Kellie Cunningham lost her baby boy five months into her pregnancy in 2017. She named him Henry.

"It changed my life," she says.

"I went into hospital one person and came out a totally different person."

Kellie said she did not get any NHS follow-up or mental health support after she left hospital, and went on to develop PTSD, only picked up by a support group led by the baby loss charity, Sands.

She began to pay for her own therapy.

"I was just left to pack up my things in hospital that day, take the little memory box they gave me, and leave the building. I felt so alone.

"People think because your baby never lived, you cannot feel a close bond with them.

"But as soon as you find out you are pregnant, you are planning your futures. For that to be taken away from you in a second has a big impact," she said.

Kellie now raises money for Sands, and is a befriender for the charity, helping other women who have lost babies.

She continues to suffer with PTSD and anxiety five years after the loss of Henry.

"I strongly believe if I had been given support when I left the hospital I would not have ended up with PTSD, or still be in therapy, years later."

Estimates suggest there are about 250,000 miscarriages in the UK each year, with most occurring in the first three months of pregnancy.

But miscarriage rates are not officially monitored in the UK, or most countries around the world, making it very difficult to know the true scale of pregnancy loss and the psychological impact that follows.

Prof Bourne, who works at Tommy's National Centre for Miscarriage Research at Imperial College London, has studied this for many years.

In one of the largest studies of its kind, published in 2019, he attempted to estimate just how common PTSD symptoms are.

The surveys focused on women at three London hospitals who experienced miscarriages in the first three months of pregnancy, and some who had ectopic pregnancies - where the baby develops outside the womb and cannot survive.

Of 338 women who completed the study, approximately 18% had some symptoms of post traumatic stress nine months after their loss.

If these numbers were replicated around the UK, some 45,000 women would experience symptoms of PTSD each year, according to Prof Bourne's calculations.

But he says this is likely to be an under-estimate, because the research did not look at miscarriages that happened at home or those that happen later in pregnancy.

Symptoms of PTSD are wide-ranging and can include:

Therapies available on the NHS include talking ones such as trauma-focused cognitive behavioural therapy, eye movement desensitisation and reprocessing, and sometimes medication.

But the Miscarriage Association says there is an urgent need for better access to talking and other psychological therapies for those affected. At present, most women have to ask for help themselves rather than support being in place.

Prof Bourne believes there needs to be more research into other ways of helping people experiencing loss.

One idea his team is experimenting with is offering women virtual reality headsets during miscarriage procedures.

It builds on previous work that shows VR headsets can help reduce pain during some medical procedures.

Researcher Dr Nina Parker says the aim is "to transport them to sort of a more calm, virtual reality world for distraction from the pain and anxiety during the procedure".

She adds: "There is nothing that we are ever going to be able to do that takes away from the loss and the trauma of losing pregnancy and having a miscarriage.

"But if we can do everything that we can to minimise any additional trauma we might be adding to in the interactions that are had within the hospital, then we are obligated to do that."

Meera had a miscarriage before Christmas and was offered use of the VR headset at Queen Charlotte's hospital in London. She said she was glad to use it while having what's called a manual vacuum aspiration procedure to remove pregnancy tissue from the womb - and would encourage others to try it.

"I shed a tear but without feeling suffocated or overwhelmed by what was happening because I felt I was in this other space, watching this totally different scene," she said.

"But I still felt present for what was happening to me, which was important to me too."

Dr Parker is also investigating whether immersing people in brief tasks - such as playing a modified computer game or listening to a podcast - immediately after recalling a painful memory, can help prevent PTSD and other psychological problems developing.

The theory is that getting someone to do a task in this way could have an impact on the way the brain processes difficult intrusive memories, and may help prevent them from developing more distressing and persistent symptoms.

A Department of Health spokesperson said: "We're committed to making the NHS the safest place in the world for maternity care and supporting anyone who experiences a miscarriage."

A maternity disparities taskforce was launched recently to ensure all mothers and babies receive the best care.

The government said it had also set up 26 maternal mental health hubs for 24,000 more expectant or bereaved mothers to access treatment for a range of mental health issues in England.