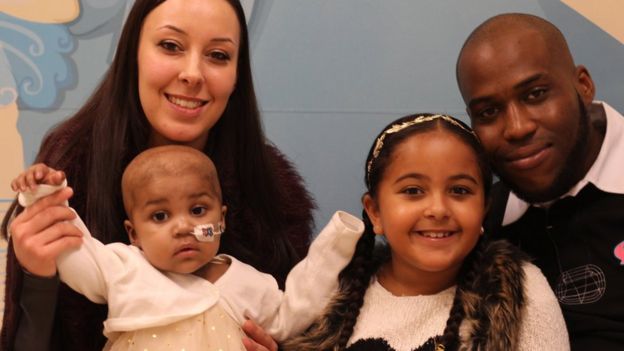 The first person in the world to receive a pioneering genetic therapy has had her cancer reversed, say Great Ormond Street doctors.


One-year-old Layla Richards, from London, had incurable aggressive leukaemia only five months ago.

Doctors used "designer immune cells" to fight the cancer and say her improvement was "almost a miracle".

It is too soon to know if she has been cured, but her progress already marks a huge moment for the field.

Layla was three months old when she was diagnosed with the condition.

As often happens with very young babies, chemotherapy and a bone marrow transplant failed to cure her.

End of the line

Doctors had nothing left to offer and, the day before her first birthday, her family were advised to go through palliative care.

But Layla's dad Ashleigh refused to give up. He told the BBC: "I didn't want to go down that road, I'd rather that she tried something new and I took the gamble.

"And this is her today standing laughing and giggling, she was so weak before this treatment, it was horrible and I'm just thankful for this opportunity."

Medical staff, in conjunction with the biotech company Cellectis, rapidly gained permission to try a highly experimental therapy that had been trialled only in mice.

The treatment - designer immune cells - were the product of cutting-edge advances in gene editing.

Previous therapies have tried to add new genes to correct a defect whereas this one edited those already there.

Microscopic scissors - technically known as Talens - were used to precisely engineer the DNA inside a donor's immune cells.

The cells were designed to seek out and kill only leukaemia cells and to make them invisible to the strong drugs given to patients.

The designer cells were then injected into Layla and she also needed a second bone marrow transplant to restore her immune system.

Now, just months after her family was told she had incurable cancer, Layla is not only alive, but has no trace of leukaemia in her body.

Dr Paul Veys, from Great Ormond Street, said the transformation was one of the most remarkable things he'd seen in 20 years: "We're in a wonderful place compared to where we were five months ago, but that doesn't mean cure.

"The only way we will find out if this is a cure is by waiting that one or two years, but even having got this far from where we were is a major, major step."

He described the run of events as "almost like a miracle".

Layla's story is being presented at the American Society of Haematology, but this is only a single case that has not been tested in a clinical trial.

But the pace of progress in gene-editing technology is phenomenal.

Prof Waseem Qasim, from Great Ormond Street, added: "This is the first time human cells, engineered in this particular way, have been given back to a patient and that was a big step for us.

"The technology is moving very fast, the ability to target very specific regions of the genome have suddenly become much more efficient and we think that this technology will be the next phase of treatments.

"The technology itself has got enormous potential to correct other conditions where cells are engineered and given back to patients or to provide new properties to cells that allow them to be used in a way we can only imagine at the moment."